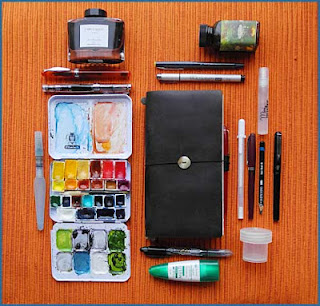 Reviews and Demos:
-- Review of the Traveler on FPN is here
-- Review (and comparison with the Pelle) by GourmetPens is here (2012)
-- Review - Japanese Minimalism: The Midori Traveler's Notebook (2008)
-- Excellent introductory video demo by by Brian Goulet of Goulet Pens (2013)
-- Various ways to load the inserts into the notebook, video demonstration by Brian Goulet of Goulet Pens (2013)

DIYs:
--  Midori Travelers Journal Watercolor Refill Tutorial, from refalo.com
-- Make refills: directions are here
-- Make it Yourself: Midori Traveler Notebook Knock Off, from comfortableshoes
-- A scan of the repair diagram is here
-- Things to note on leather cover - tips on how to take care of your Traveler
-- Make your own Midori Traveler's Notebook kraft file - I'd modify the dimensions of this to increase the width of the spine area, to make sure it would fit outboard of the inserts.

-- How to saddle stitch your booklet  - Nicely illustrated how-to.
-- Creative Projects for the Filofax, Midori, and other personal organiser systems, from My Life All In One Place, UK

Excellent links! Thank you for compiling these and posting them. It's a BIG help!!!

Thanks for these links. I love my Midori too!