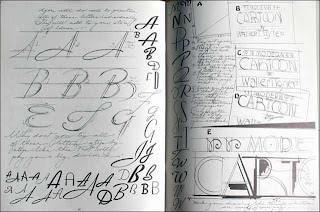 Resources for those interested in the art of handmade signs, handmade posters, hand lettering for any purpose. The word as art? Legible legitimate graffiti?

Pictures of signs and type: 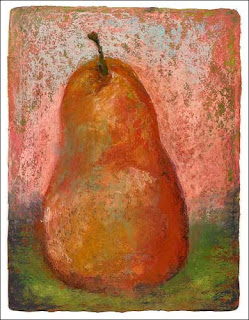 This is about 6" x 8" on this nubbly Japanese print paper that I found yesterday on/in my desk. (This mystery paper is really nice. It has deckles on all four sides. Pretty!)

I first did an underpainting with watercolors and gouache in compliments of the final layer. A bright golden green for the wall in back, strong Ultramarine blue for the pear, and a dark quin magenta for the tabletop. The paper really sucked in the pigment. It was bright and lush.

Then I covered it all with one thin coat of Clear Colourfix primer.

Then whaled away with the pastels, all soft. There are three layers of pastels-plus-fixative.

Where we wanna be? 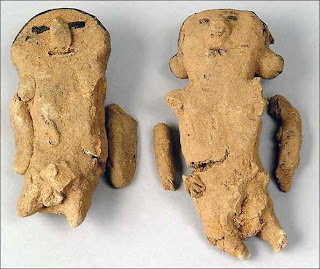 Who are these men? Are those loose pieces detached limbs? Or do they represent other detached appendages? Are these sacred effigies or are these a child's dolls? They are dated AD 1020-1140. About the time of the First Crusade in Europe and the penning of La Chanson de Roland. The fellow on the right: ears or ear ornaments?

These two men . . . (Look at their faces. How could they be other than men? Both of them.) These two men were found at Pueblo Alto, located on a mesa top overlooking Chaco Canyon. Pueblo Alto is one of the greatest of the Great Houses in the Ancient Southwest. It is the central point for a radiating series of ancient ceremonial roads. Evidence indicates that Pueblo Alto wasn't a residential Great House, however, but a ceremonial site. Intermittent occupation and an enormous midden, with an estimated 150,000 broken ceramic vessels. Far more than would be 'expected' from a resident population. Smashing ceramic vessels after a feast was a common practice back in the day. Imagine very large and noisy ceremonies. 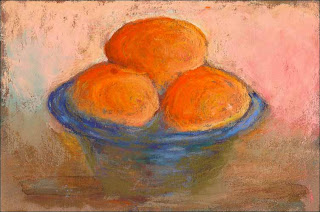 With "fixative" on hand, it's difficult to know where or how to stop. Yeah, the fresco look is enticing, but gimme a break.

These squashed oranges are after a demonstration piece in my favorite how-to pastels book, by Bill Creevy: The Pastel Book: Materials and Techniques for Today's Artist (and go to page 124 after searching for the word 'paste') He is using it to demo a technique that layers the pastel with "modeling paste". Creevy is my hero. What the heck is modeling paste?

My piece is about 9" x 6", on 500 grit UArt paper, tinted a neutral gray with PR Velvet Black ink, which was diluted with water. I used mostly Ludwig and Mt. Vision pastels, all very soft. 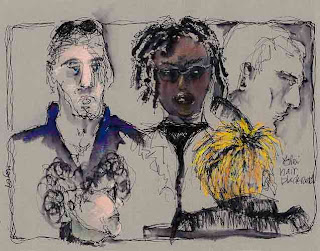 This is pen and ink, worked on later with Conté Pastel Pencils. The 37 is my new favorite bus. Especially on exquisitely lovely days when any feeling sentient being don't wanna travel underground. No way.

Book find of the week is 50 Secrets of Magic Craftsmanship, by that raving lunatic Salvator Dali, originally published in 1948.

A sample: "The two most fortunate things that can happen to a painter are, first, to be Spanish and, second, to be named Dali. Those two fortunate things have happened to me." S.D. (Another loony behemoth, Frank Lloyd Wright, had a similarly large opinion of his own merit. Q: Does genius often come with such a burden?)

I was reminded of my visit to the Dali Museum in Figueres, outside of Barcelona, and all the wonders therein. Particularly the rusted car in the leafy central courtyard with the manikins inside that spouted water.
at 5/20/2009 09:19:00 AM No comments: