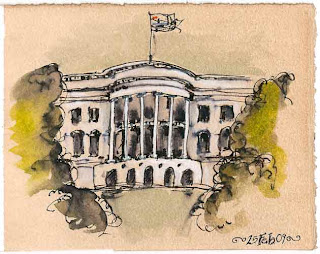 This is Nooder's Nightshade ink on Waterford Aquarius II paper that I had tinted to a kraft color with an acrylic wash. I was worried that the wash was going to abrade the paper so badly that the ink would feather. But it didn't. Bravo ink! Bravo paper! (I should have more faith.) Sketch later touched up with my new Schmincke Horadam Gouache. (Gad but it's expensive!)
at 2/28/2009 11:07:00 AM No comments:

This bus brakes for sausages. 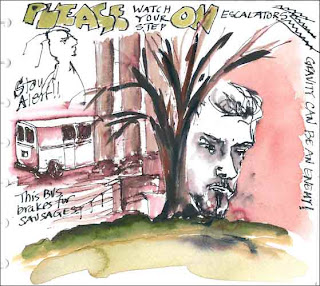 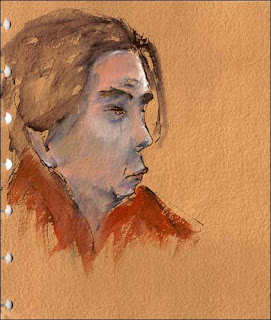 This is a very nearly chinless lady on Metro, done in PR Velvet Black ink, later messed up at home with gouache. (I may like this kraft-colored watercolor paper better than the kraft paper. Hmmm!)

I am attempting to see how portable gouache is. It has such a tendency to dry out and crack apart, that it may not be very plein-air-ish. Keeping it soft enough to stay put and solid enough to stay put, simultaneously, is tricky.
at 2/20/2009 01:36:00 PM No comments:

Campania For A Day 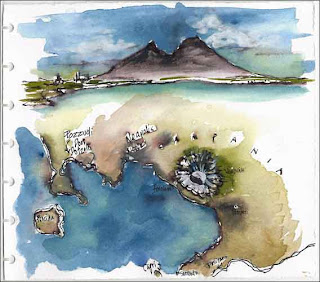 I enjoyed my whole Birthday Weekend, including the Resident Associates seminar on Saturday, entitled Ancient Pompeii: Modern Views. It was organized in conjunction with the delightful show at the National Gallery of Art: Pompeii and the Roman Villa: Art and Culture around the Bay of Naples. (The first and the last speakers possessed very similar, very droning, very affected, very professorial delivery styles. Made you want to scream. Turns out they are married. Wouldn't you know!)

The third speaker, Professor Christopher Gregg, from GM had the most interesting section, about the pleasures and entertainments common in ancient Pompeii. I am thinking of trying to find a cookbook of ancient Roman recipes and try some of their fish dishes. Wonder what they will be! We also heard about Pompeii's Spectacula (or amphitheater), the venationes held there, and the Lupanar.

In any event, I made this sketch of Mt. Vesuvius and then the little map of il Golfo di Napoli below it, during the final speaker's section. I added gouache washes at home today. I like the way the summit caldera is rendered. Not exactly 'to scale' obviously, but it looks cool. Or, ummm, hot. . . . One of the speakers was asked about plans to excavate the 'Unexcavated' portions of Pompeii. His answer was kind of scary; he said that the heartily agreed with the policy currently in place to leave these areas unexcavated permanently. He said that these areas are well buried and that they will survive when the next pyroclastic event occurs at Pompeii. These buried areas will survive when everything that is exposed right now is destroyed. Not "if", but "when". When the next eruption occurs. Gave one the shivers.


This is 'The Forum at Pompeii with Vesuvius in the Background' by Christen Schjellerup Købke painted in 1841, now at the Getty in LA. The Getty Villa having been modeled on the Villa dei Papyri, in Ercolano. 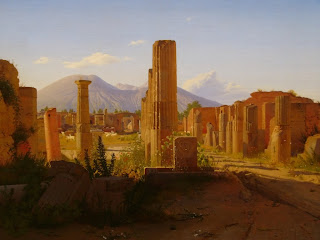 Here is another lovely view of Vesuvius, from the beach of Naples, entitled 'Am Strand von Neapel' painted by Oswald Achenbach, probably around 1885. 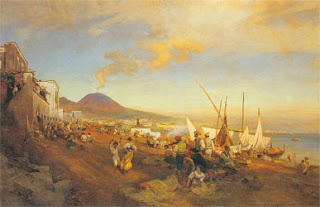 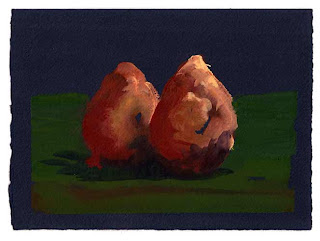 Goodness me, I don't know! This is about 6" x 7-1/2", gouache on black Arches cover. I have seen some very nice pastel and gouache work on Somerset Black Velvet and this is a test to see if I want to order some. Next test will be pastels on the Arches black.

The Somerset Black Velvet is considerably heavier (250 gsm) than the Arches cover (136 gsm). Interesting! Might be like illustration board. 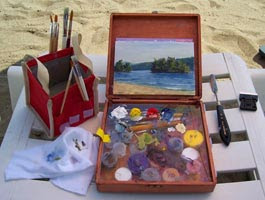 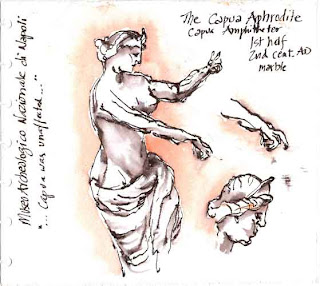 I visited the Pompeii show at the National Gallery of Art -- Pompeii and the Roman Villa: Art and Culture around the Bay of Naples -- and enjoyed my first glimpse very much. This is a quick sketch from one of the only benches in the entire exhibition. (Why do they do that?) 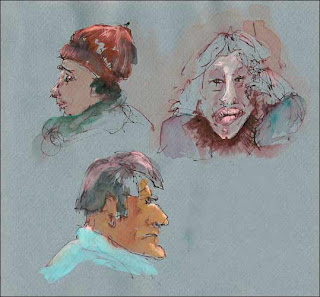 This is done on Daler Rowney pastel paper, cut to fit and and snapped into my 7"x8" everyday sketchbook. The initial sketch is with Noodler's Red-Black "near bulletproof" ink in the old trusty Lamy Vista. The gouache was added later. I like the lights of the gouache on this blue paper. Will do more with my new paint box!

I have also been using an old Bloomies shopping bag, turned inside out, and pieces cut to fit my sketchbook. The kraft color is nice but it's too flimsy. I have received two excellent kraft paper sketchbooks sold by a UK company called Paperchase that have much nicer much thicker kraft paper. I want more of 'em so I don't have to be too careful about using them up.

There are some wonderful kraft paper and cardboard box sketches from our local Mr. Christian Tribastone here. And some nifty gouache sketches done by Jamie Williams Grossmanon on kraft here and here and here. Real nice!!! 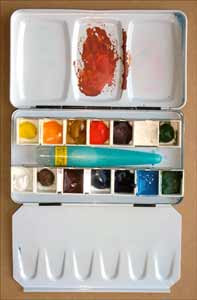 red by all that I have made up a small paint box with gouache. I am going to try to get out with it this weekend and sketch. Some of the colors are real runny (mostly the Graham brand tubes) so I am having to leave it out all night to get it to dry out and "set up" a bit. So when I close the box the paint won't run all over. We'll see how hard they are tomorrow morning.