Mean as a snake

This is on peachy colored (not so orange) pastel paper. Done with ink and later mucked up with gouache and pastels.

These folks are on Metro and this was possibly the last day of dreary cold wet weather for quite a while. We'll have dreary and wet, but cold? Think not. 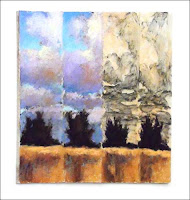 Yesterday I had the pleasure of attending a meeting of the Maryland Pastel Society! It consisted of four simultaneous demos, one going on in each corner of a big assembly room, where each demo/teacher spent a half an hour or so on her topic. The audience rotated at will among sessions.

The four topics were intended to get the membership ready for plein air work:
The pic on the right, above, is from the sky/clouds demo given by the group's president, Jean Hirons. She had a piece of paper divided into quarters (as you see) and did each of her demos on one of the panels. The one I watched was done on the third panel from the left and the sky treatment differed considerably from the other two! It was fun to compare and contrast as she painted. Important tip: the sky should echo the ground in temp/color/tint. This ties the piece together.

The verticals demo was done by Lisa Sheppard. I very much enjoyed watching how she built her value masses, based on the angle from which each mass was lit. And then she brought them to life with just a few additional strokes.

The land demo was done by Mary Anne Warner, a 'realist' painter of large skill, who (unfortunately for her, here in this locale) hates green!

The water demo was seriously instructional, based upon the correct premise that the more you know about a thing, the better you'll paint it. It was presented by Deborah Maklowski. (Another excellent How-To-Paint-Water in pastels demo is here.) 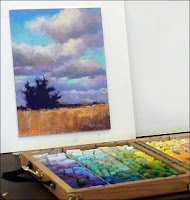 Two books were mentioned reverently by more than one presenter:
--- Carlson's Guide to Landscape Painting, by John Carlson (1958)
--- Capturing Light & Color With Pastel, by Doug Dawson (1991)
From what I saw, the Carlson book looks pretty interesting. We'll see. It's on the way!

The Hounds of Hell 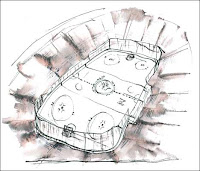 Bravo to the Terriers of BU, the NCAA hockey champs this year! The Frozen Four was a remarkable experience of a novel brand of ice hockey for me, one entirely devoid of hype, promo, and (most surprisingly) beer sales! To see the arena with all it's advertising erased and/or shrouded was like breathing fresh air. The pep bands, the hoards of students, the 'cheers', all really neat!

(To see and hear it all back to 'normal' on Wednesday night was like going back into a dank and smoke-filled, yet familiar and homey, neighborhood pub. Filled with all your dear old familiar loud-mouthed friends. Ahhhh. . . home!)

This is in my sketchbook, about 8' x 8' on Aquarius II, in PR Velvet Black ink in my Lamy Vista fountain pen. It's washed with a waterbrush later. I made the sketch between the two semi-final games on Thursday night. The view is from our seats for the tourney, which were smack up by the ceiling. The far end of the rink was so far away from us that there was a time delay before we heard the **whack** sound of a shot being taken on that far goal. I mean, these seats were UP THERE. Stratospheric. 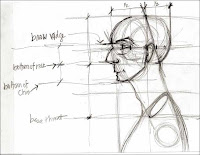 This recent workshop, Basic Figure Construction was quite interesting and useful. Our instructor was Malone Samuels, who has been teaching drawing for decades and is extremely skilled and soooooo patient.

He also teaches cartooning classes and he mentioned a 'gesture ' figure drawing class that sounds wonderful to me. I really enjoyed his approach, his ideas, his mixture of measurement plus calculation with emotion/intuition.

I put all my notes from the workshop in my everyday sketchbook and will try to refer to them daily. I didn't do well at all with the models during the weekend, but am SURE that these 'principles' will help every day.
at 4/06/2009 11:00:00 AM No comments: 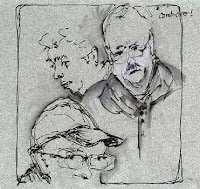 Thank you to my friend Sam for suggesting that a border drawn around my interlocking figures might help pull them into an ensemble. I am not sure a square is the answer, but the concept is full of merit and I will continue to make stabs at it.