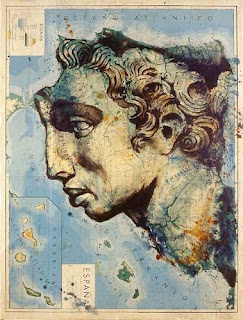 Spectacular map art by Fernando Vicente, in Madrid. Wonderfully textured and touchable and comfy. I like these a LOT. 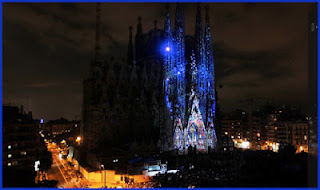 Recently "Moment Factory was invited by the City of Barcelona and the City of Montréal to create the first sound and light spectacle to be projected on the complex façade of the Sagrada Família in Barcelona."  It took Moment Factory four months to design and set up the 15-minute-long show entitled Ode à la Vie, but holy gaudí it sure is worth it.
--= See a short vid here.
--= Watch the full son et lumière show here. (I like this vid the best of all the full-length HD versions because it's like you're really there.)
at 9/28/2012 01:58:00 PM No comments:

Jewels of the Trade 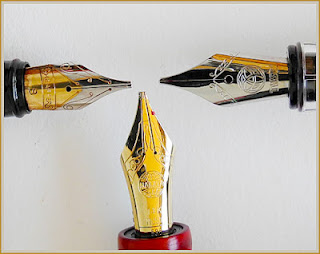 Clockwise from the left: a vintage Sheaffer Prelude with a "B" italic nib, a Twsbi 540 with a 1.1m italic nib, and the King of the Hill, the Nakaya Neo Standard with a Music nib. 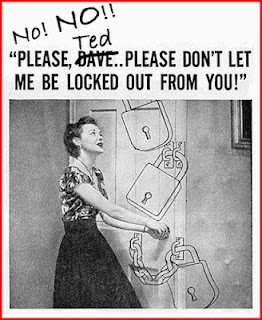 Day Numero Uno of the 2012 NHL Lockout [sigh] : Greedy owners (I am looking at you, Ted) lock out all their millionaire players and all us hapless duped chump-like fans.

Aha! Now is the time to explore entertainment alternatives, such as the NSO and ballet. Right? Right! By golly, RIGHT! (Wait. Are you allowed to heckle ballet dancers when they mess up a step? No?! Hmmm. . .) 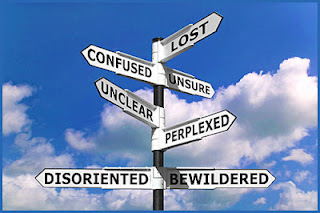 Lizzy in the Winda 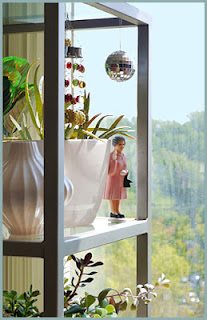 It's difficult to describe how delightful the weather has been lately. The hideous record-breaking heat and soul-crushing humidity of a few weeks ago never happened.

She's my solar-powered Queen Elizabeth. The tiny solar panel in the top of her little purse powers her regally waving upraised hand. This week, bathed in sunlight, she's been a-wavin' to me with a vengeance. (She comes from Doodlet's in Santa Fe.) 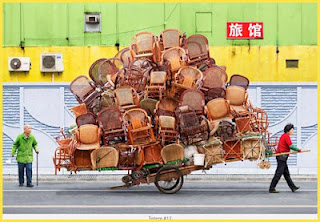 I have never been to China, but I am dubious. Anyone?

Ugly Means to a Satisfying End: the New Barnes 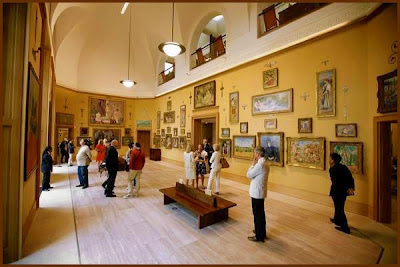 Backstory: A means-end analysis of the birth of the new Barnes Foundation in downtown PhillyPA would be very complicated and very ugly. The players ranged from the most blackhearted of the modern day Robber Barons (the Annenbergs, Mr. Perelman, and the Pew Trust folks) to saintly art academics. There was hubris, guile, thievery, dirty-dealing, and drama enough to make Philadelphians glow with pride.

Overdose on these details via The Art of the Steal, a documentary film with a title that tells you the angle from which it approaches the issues. According to the film's director, Don Argott, at the discussion session after the film's screening at the 2009 New York Film Festival: "People were yelling, screaming at each other. These issues bring out these emotions. I’m not sure why. But for some reason the Barnes stirs something up in people.”

I had been stirred. I had been to the Merion Barnes out on the Main Line a number of different times over the years and enjoyed it very much. The ambiance and the intimacy of the galleries in the "Palladian château" and the marvelous gardens, as well as the eye-popping spectacle of the collection itself, appealed to me very much. (I briefly mourned its passing here.) I had been peripherally aware of the war for its soul (and its art loot), which was eventually won by the Robber Barons (natch!), and I had been VERY eager to see for myself the result: the new cash-cow Barnes on Ben Franklin Parkway, in the heart of PhillyPA's museum mile. A Smithsonian RA 1-day field trip allowed me the opportunity.

Success!: With relief, and with both a deep genuflection plus a heartfelt apology to Dr. Barnes, I pronounce the result to be just fine.

The building is a couple of simple long boxes, but becomes more interesting the closer you get. Varied textures and sizes of limestone slabs lift the mood of the heavier base. The milky glass of the long cantilevered upper box does not distract. The entrance is approached along river pebble-filled zen-like twin pools in a sequestered exterior space, around on the other side of the complex from the Parkway. Once inside you go through a series of various cavernous boxy spare spaces, the purpose and details of which went right over my head, eager as I was to see what the heathens had done to the collection itself. And to Dr. Barnes' brilliant way of displaying it.

Hurrah! It's intact! The scale and the layout of the rooms duplicate the Merion experience almost exactly. Dr. Barnes' scheme for juxtaposition and resonance among objects is preserved. The scale is the same. You are still nose to nose with multiple masterpieces. And a timed ticket entry system ensures that you have ample personal space to enjoy it all. You are still happily trying to decipher the relationships among that Renoir and this Amish blanket chest and that African mask and this Cézanne and that piece of door hinge. It's still the wondrous puzzle box it was in leafy Marion. 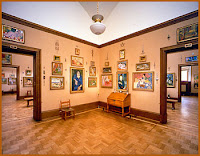 The success and sincerity to original concept of the permanent collection spaces makes you forget the Renoir key chains and the Van Gogh posters in the gift shop, the eight dollar bottle of beer in the restaurant, and the "Event" being set up by the caterers in the lobby area. It also (almost) makes you forget that the collection is no longer closed one day a week to accommodate art education classes, as had been mandated by Dr. Barnes.

Despite all that, the new Barnes may be proof that I can have my cake and the Robber Barons can eat it too. I was all ready to blame the greedy blackguards for stealing and then ruining "my" Barnes. Now I am tipping my hat. Let 'em have their old-white-men-only parties in the lobby. Just so I can still have my profusion of Cézannes. And it's now a much shorter cab ride from 30th Street Station.

Bottom Line: Go, and then go back often. It's just up the road from DC and it's a winner for everyone. 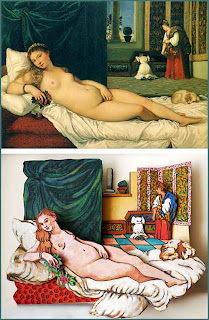 At top is Venus of Urbino, 1538, by Titian. The painting hangs in the Galleria degli Uffizi in Florence. More.

Gods are watching you. Yes. You. 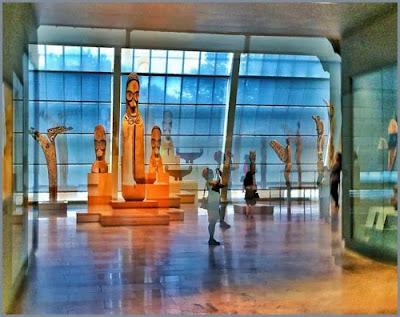