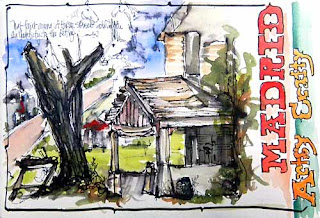 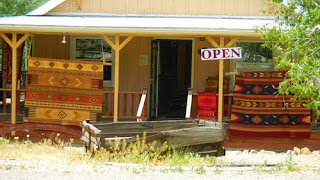 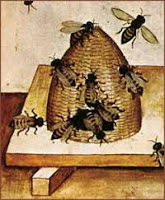 Extra special bonus! One of my fellow workshoppers is an amateur apiculturist and brought us a three-jar sampling of her bees' work. What a special treat! Particularly because she gave me one of the jars!

HEAVEN on cheese, on crusty toasted bread, in coffee. 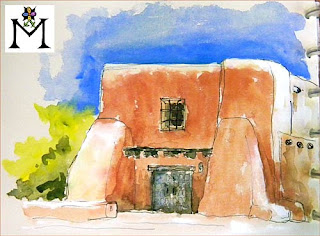 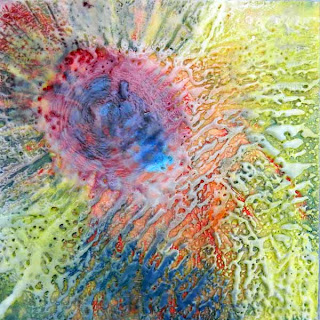 Yesterday was the last day of the four-day Going A Little Larger encaustics workshop in Santa Fe. Excellent time!! Good solid basic info, a good crew of fellow pupils, and an outstanding facility.

The instructor, Ellen Koment, is offering a two-day workshop next week that I am considering. Fun stuff.

Slideshow of all the pieces I did: Only three are large (24"x24") -- the three cruciform pieces. The rest are 10"x10" and are better, IMO. Freer and looser and less labored. I like them better. Sort of.

kitsch, n. "The concept is associated with the deliberate use of elements that may be thought of as cultural icons while making cheap mass-produced objects that are unoriginal."

I found it! Ground Zero for Hideous Southwestern Decor Elements! It's called Jackalope Mercado. I was wondering where all the dead cow skull wall sconces came from. Voila! 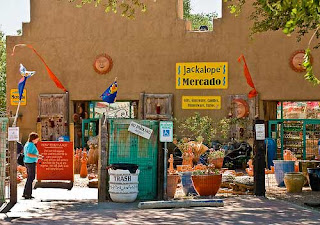 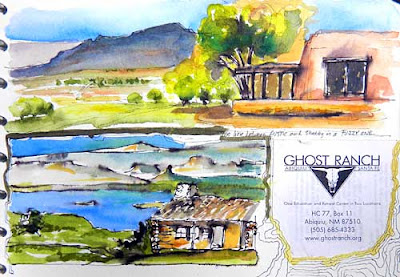 Strange place. Exquisite location and scenery. Superb cottonwoods, of an age and wtih a dignity to be envied. Odd place, though.

The bottom sketch, above, is of an "old" cabin on a hill, (left over from the filming of 'City Slickers' in 1990) with the blue-blue Abiquiu Lake in the background. Whatta view! Whatta spot! 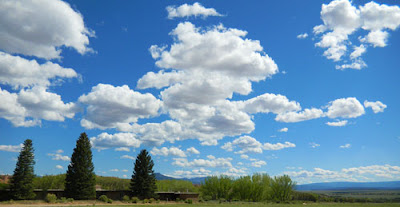 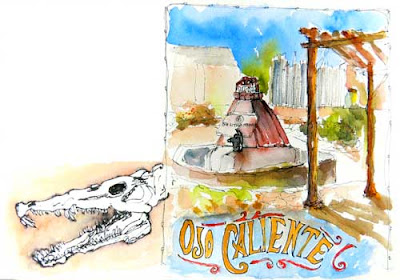 Ojo Caliente (literally Hot Eye, I think) is an old hot springs between Taos and Abiquiu. It has a wonderful antique, nineteenth century feel to part of it.

This spring in the sketch is called 104 Lithia. The 104 is for the temperature of the water. It's rich in lithium. You fill your cup at the old hand pump in front.

No, sorry. I was too chicken to taste it. But I did loll around the patio areas and soak up the ambiance. Might be a return trip in the offing. I feel the need for a mud bath.

The dino on the left is a relative of the Official State Fossil: Coelophysis bauri. I sketched his fine head in the Ruth Hall Museum of Paleontology, at Ghost Ranch . . .
at 5/21/2010 01:23:00 PM No comments: 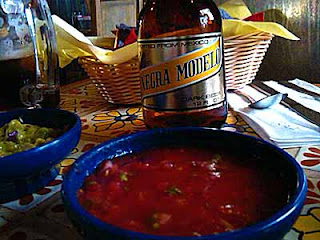 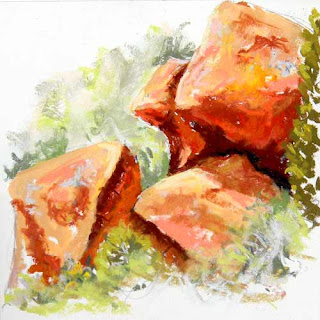 [*Look it up: orogeny.] This pic is about 10" x 10", in pastels. Done plein air in the Garden of the Gods. There was a sheer cliff right behind this cluster of boulders that rose about twenty stories. Straight up. It was dotted with swallows' nests. But almost at the very top was a white-smeared ledge where an eagle pair was tending a nest. While I was there Parent "A" brought in a morsel, greeted most cacophonously. Neat-o! 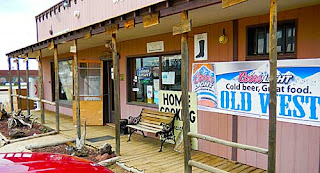 On to Taos today, passing by and through your Southern Rocky Mountains. Or more particularly the Sangre de Cristo Range.I stopped for a very late breakfast at the world famous Old West Cafe in Fort Garland. There I packed away such a breakfast, washed down with a root beer, that will stay seared into my psyche forever.

Taos for the night, a town where all landscaping, including the occasional window box or sidewalk planter, is banned from the historic town center. There to be replaced with the required (I believe it's a law) three-foot-long, hanging cluster of dried up shiny red chiles. La ristra. A must-have. 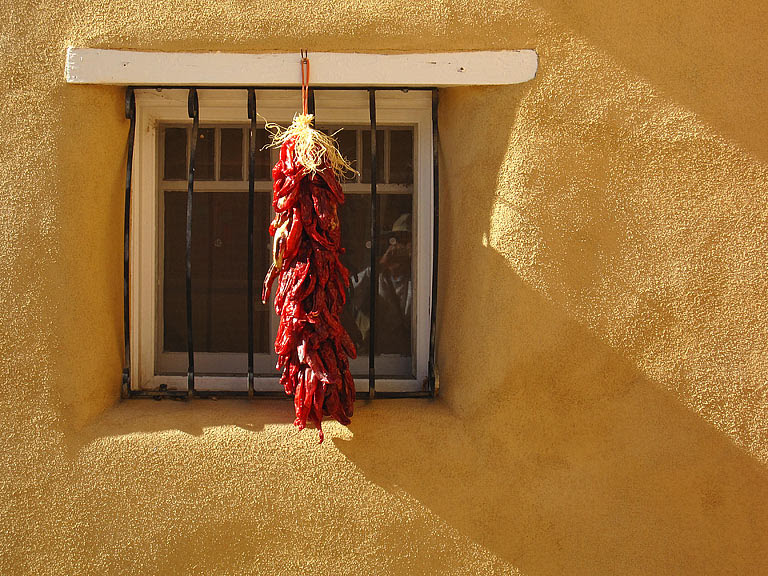 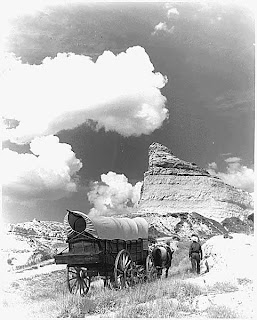 I have crossed safely and reached Colorado in one piece.

✱ Beautiful Day One, to Indiana. I believe the siting and the design of the Interstate highways across West Virginia was pretty much a series of random choices. (Hey, Jake! This holler or that holler?) There's not a straight two-mile stretch anywhere. But if the weather is good (and it was!) it's as pleasant as can be. I saw a beautiful male pheasant on the edge of the forest, all decked out in his Sunday best. Lovely!

✱ Rainy Day Two, to Kansas. Rain all day, at times a Florida-style Toad Choker. Was delayed by three fender-bender-generated slow-downs, but each was a welcomed break from the white knuckle driving.

✱ Western Day Three, from Kansas to the Front Range: my favorite day. This is where the land changes to high plains prairie and you see pronghorn antelope "grazin' in the grass".

The clouds lay very (weirdly) low to the ground the first part of the day, obscuring everything higher than about 100 feet from the ground. (Which means my favorite wind farm was just a bunch of white stumpy tubes, vanishing into the void.) But the clouds broke up nicely in western Kansas and the drive across absurdly flat eastern Colorado was fine. I had my Zebulon Pike Moment on a ridge just east of Limon ("the 'Hub City' of Eastern Colorado", population 2,071). Halloa! Pikes Peak on the horizon. Yippeee! Aim for it!

So from today onward I am off the highway and am wandering. Today is to be a fairly nice day in these parts (Manitou Springs) but tomorrow is partly rainy again. Which means (possibly) snow and/or ice in the mountains west and south of here and around Taos. Hmmm! Take the high road through them or skirt around the edges? 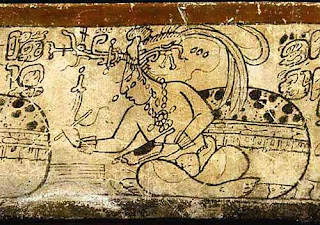 Scribe at Work. Maya Book of the Dead Vessel 69. From Painting the Maya Universe: Royal Ceramics of the Classic Period. (Retrieved from Justin Kerr's Maya Vase Data Base)
at 5/13/2010 08:13:00 AM No comments: 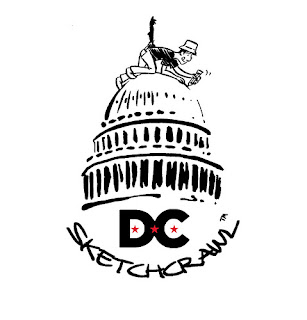 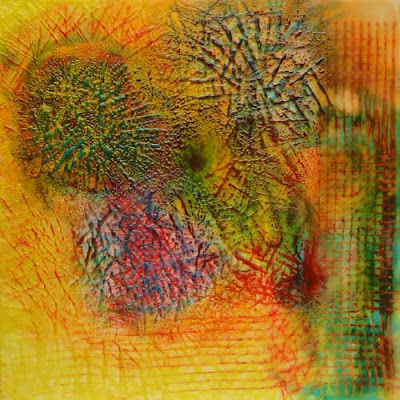 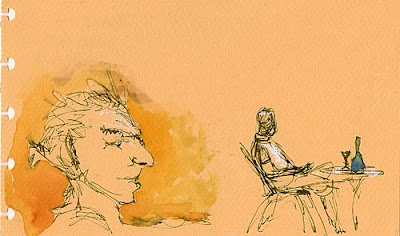 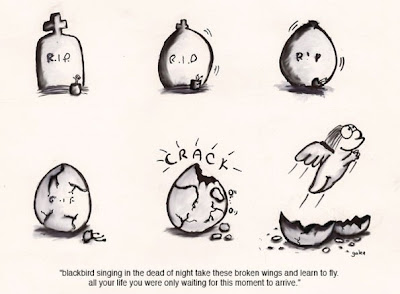 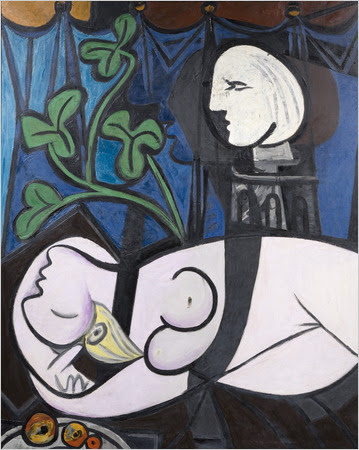 One of the pivotal art quotes of all time, albeit entirely un-documented (as far as I can find), is this one attributed to that old fart Pablo Picasso:

How 'bout that, eh? The secret of life. Some may say it indicates an absurdly overweening arrogance. Like, 'gimme a break, folks, you know they'll buy any old piece of caca I slap together.'  Or that it's ridicule or contempt of the notions of good craftsmanship and great care in materials and (especially) techniques that are valued in art.

Maybe so. But what he's doing here is advocating freedom. He had this thing in his chest that he had to get -- right away! right now! -- out and onto the paper. What it was that had to get out had nothing to do with "redness" or "blueness" or any other mere hue. It had nothing to do with the weight of the paper, the lightfastness of the pigment, or even maybe the composition of the picture. Rather, it had to do with the thought or impulse itself. With the root of it. Not the color it might (or might not) be rendered in.

I see a lot of pixels and energies lavished on materials, colors, tools, supports, techniques, and all the other paraphernalia involved in the making of art. And not so much attention paid to the soul of it. What Picasso says to me in that quote is a version of the venerable old motto Just Do It. A life plan I wholly endorse.

In Any Event, today seems like a good day to celebrate the old guy, since very recently a painting of his broke the record for most dough paid for a painting at auction. His 'Nude, Green Leaves, and a Bust' went for $106.5 million at Christie's. That's it there, above. This 1932 painting is of Picasso's "mistress", Marie-Thérèse Walter, "who was a teenager when she met the middle-aged Picasso in Paris".

You can read all about this painting, the Picasso 'period' it comes from, and his relationship with Marie-Thérèse, elsewhere. (Sample: “Ironically, this painting, which celebrates feminine submissiveness was executed on International Woman’s Day; this would have delighted Picasso.”) 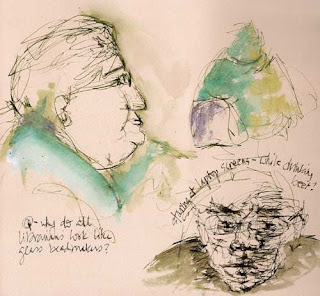